Shipping components
The transport element is threaded, and its function is to transport materials (including liquid materials). The shape of the screw groove can be rectangular or a special shape (meshing type) generated according to the principle of relative motion. The threaded components are divided into two types, forward and reverse, and can be divided into single-head, double-head and three-head threaded components.
Single-head threaded element
has the ability to efficiently transport solids, and is generally used in the feeding section to improve the extrusion volume that is restricted by the feeding volume and to transport materials with poor fluidity, such as low-density materials. It is generally used to transport materials with a particle size similar to water during the reaction process, and can also be used in the discharge section. The output of a single-threaded thread is greater than that of a multi-threaded thread, the torque is also greater than that of a multi-threaded thread, and its mixing characteristics are more than that of a multi-threaded thread. 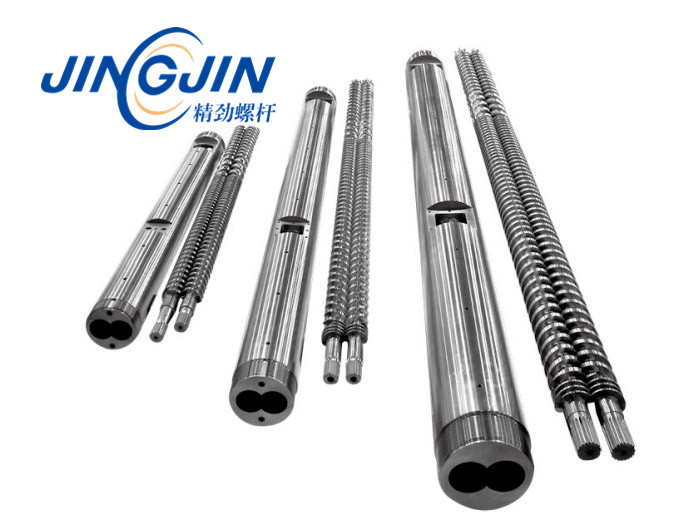 Comparison of double-thread and triple-thread
Under the same central moment, D/D. It is relatively large and the groove is deeper, so under the same screw speed, it can provide a lower shear rate, which is more suitable for processing powder materials, especially low bulk powder, glass fiber and other materials that are sensitive to shear . Compared with the three-threaded component, under the same shear stress and torque, the two-threaded component can be operated at a higher speed and the productivity is higher. The three-threaded element can apply higher uniform shear rate and shear force to the material under the same screw speed. In addition, due to the shallow screw groove, the material layer becomes thinner, and the three-threaded component has better heat transfer performance than the two-threaded thread. Conducive to plasticization and melting of materials. However, due to the intense shearing, it is generally not easy to process materials that are sensitive to shearing, such as glass fiber and PVC.
Lead changes and characteristics:
In the screw combination, for the output-oriented occasions, selecting a thread with a larger lead is beneficial to increase the output value. For the extrusion of heat-sensitive polymers, selecting a large lead can shorten the residence time of the material and reduce the thermal degradation of the material . The thread lead has a great influence on the extrusion volume, mixing characteristics, and torque. Generally speaking, adding the thread lead and the screw extrusion volume reduces the residence time of the material, and the mixing effect on the material is relatively reduced, and the torque is also Become smaller. Regarding the mixing-oriented occasions, select the middle-lead threads, and for the threads in the different working areas of the screw 2, the lead is gradually reduced. Most of them are used for the output and pressurization of solid materials, and then improve the melting. Speed ​​or blending speed and extrusion stability.

0
Views: 26
PREV: How to equip the injection molding machine with screw
NEXT: Relevant measures to prevent extruder screw abrasion and screw corrosion